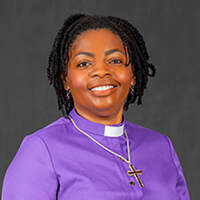 Bishop Cynthia Moore-Koikoi
Bishop Cynthia Moore-Koikoi was elected as a bishop of The United Methodist Church by delegates to the 2016 Northeastern Jurisdictional Conference, meeting in Lancaster, PA. She began her assignment to lead United Methodists in Western Pennsylvania on September 1, 2016.
Bishop Moore-Koikoi earned a Bachelor of Arts degree in psychology from Loyola College in Maryland in 1988, and a Masters of Arts and advanced certification in school psychology from the University of Maryland in 1992. She worked as a school psychologist for Anne Arundel County Public Schools for 17 years, serving in leadership roles as a layperson before answering her call to the ordained ministry.
She answered that call while a member of Sharp Street Memorial UMC in Baltimore, her great-grandparents' church and the church which sent her father into ministry. Her husband, the Rev. Raphael Koikoi, served as pastor there until February, 2017, when he was moved to Western Pennsylvania.
The Bishop is familiar with church life and ministry in rural, urban and suburban settings. Growing up in a preacher’s family, when she was in elementary school, her father served a rural hilltop church. Later, they moved to serve a church in suburban Silver Spring, MD, where she went to junior high and high school.
Attending Wesley Seminary, she was appointed as a student pastor to “a small congregation with a proud EUB heritage in a section of East Baltimore that was experiencing change.” The congregation had to learn how to navigate that change. Later she was appointed associate pastor at Calvary UMC, a large congregation in Annapolis.
Ordained an elder in 2010, she served on the Conference staff working with churches on discipleship. She later served as district superintendent for the Greater Washington Area, and most recently as superintendent of the Baltimore Metropolitan District.
In that role, she played a key spiritual role in the city in 2015 during the unrest after the death of Freddie Gray in police custody. She helped to organize United Methodist churches to open their doors and minister to children and families whose schools were closed, and to meet other basic needs. She became the face of the United Methodist Church, and church volunteers in red T-shirts were visible walking through neighborhoods, praying for and ministering to people.
Bishop Moore-Koikoi says she sees the work of bishops as “overseeing the work of the church, working prophetically, evangelically and apostolically with all as they cooperate with the Grace of God.” A key component of that, she believes, is leaving space for the transforming movement of the Holy Spirit, especially at times when the denomination is divided and many people wonder what the future holds. “That’s spiritual work -- remembering who God is and who God has called us to be,” she said. “We got God, so we got this.”
Bishop Moore-Koikoi said she sees herself as a bridge-builder, clear and confident about what she believes, while respecting others who might not believe the same way.
Her vision is of a diverse church that embraces justice and the life-saving love of Christ. As a new bishop, she’s committed to work for that. It won’t be easy, she said, “but I remind myself, God has got this. God is in control. 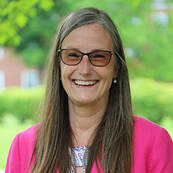 Bishop Sandra Steiner-Ball
Sandra L. Steiner Ball, the daughter of Edward J. and the late Marjorie W. Steiner, was born in Cambridge, Massachusetts and raised in Milford, Delaware.  She is a graduate of Dickinson College, (B.A. in Religion, 1984), Duke Divinity School (M.Div., 1987), and Wesley Theological Seminary (D.Min., 2003).
Sandra was ordained Deacon and Elder by Bishop Joseph H. Yeakel in the Peninsula-Delaware Conference.  She has served as an associate pastor, lead pastor, District Superintendent, and Director of Connectional Ministries(DCM). During her last year as a DCM, she also served as interim pastor of Bayside Chapel, a new church start.  Sandra was in this position when elected to the episcopacy by the Northeastern Jurisdictional Conference in 2012 and was assigned to the West Virginia Area.
Bishop Steiner Ball was a first elected delegate to the 2008 and 2012 General Conferences of The United Methodist Church and to the Northeastern Jurisdictional Conferences (NEJ).  Prior to election, Sandra served the general church in a variety of areas, including the Interjurisdictional Episcopacy Committee, the General Board of Higher Education and Ministry, the United Methodist Endorsing Agency, and the Jurisdictional Committee on Episcopacy.
For the 2016 – 2020 quadrennium, Bishop Steiner Ball was re-assigned as the episcopal leader of the West Virginia area and has responsibilities with the General Board of Higher Education and Ministry serving on the agency’s Executive/personnel and Policies Committee, Global Education and Ministry Committee, Audit and Review Subcommittee, and is the chairperson of the Division on Ministry. Additionally, Bishop Steiner Ball is one of three moderators on the Commission on the Way Forward, and chairs the annual U. S. DS/DCM training. In the NEJ, Bishop Steiner Ball continues until September 2017 as President of the College of Bishops and chairs the NEJ Vision Table.  She is Vice Chairperson of the West Virginia Council of Churches and Co-chairs a task force of the Council working to address substance abuse and addiction in the West Virginia area.
Bishop Steiner Ball and her husband, The Rev. Barry D. Steiner Ball, have two daughters:  Sarah Elizabeth and Sandra Rebekah.
script type="text/javascript"> var _gaq = _gaq || []; _gaq.push(['_setAccount', 'UA-23635099-1']); _gaq.push(['_trackPageview']); (function() { var ga = document.createElement('script'); ga.type = 'text/javascript'; ga.async = true; ga.src = ('https:' == document.location.protocol ? 'https://ssl' : 'http://www') + '.google-analytics.com/ga.js'; var s = document.getElementsByTagName('script')[0]; s.parentNode.insertBefore(ga, s); })();